As an opening to our third event, ‘Children of CRECS: Contesting childhood in the Romantic era’, Anthony Mandal declared that he was reminded of the 1984 horror movie Children of the Corn—from this we were immediately aware that this was not to be an evening of children frolicking through fields …

The first speaker of the night was Dr Sophie Coloumbeau, of ENCAP, with a paper entitled ‘Sophie, Sabrina, Virginia: Eighteenth-century Wife-Building’, which proposed a discussion of female education and its fictional representation. 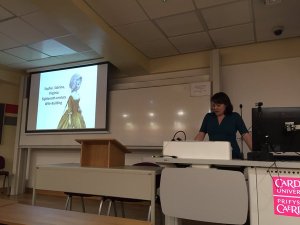 Sophie began her talk by introducing us to the gentleman Thomas Day, the focal point of her paper, who, in 1769, arrived with his friend John Bicknell at an orphanage to ‘adopt’ a twelve-year old girl named Anne Kingston. The reasoning behind this action was that Day had a project in mind; the project to build a wife. To explain the inspiration behind Day’s idea, Sophie turned to Rousseau’s controversial treatise on education, Émile (1762), which confronted accepted religious doctrine in arguing that children were born innocent, it was societal influence that corrupted them. If one accepted this view, then it followed that children could also be moulded by society. Sophie argued that through the character of Sophie in Emile, Rousseau was advocating a regime that taught girls passivity and compliance. In accordance with these ideas, Day renamed Anne Kingston ‘Sabrina Sydney’, and she was forced to endure both models of feminine docility and masculine endurance through a series of physical trials that included having hot wax dripped onto her bare skin and being pricked with needles. Day’s project ultimately ended in failure with Anne bridling at these expectations of feminine identity and, according to Day, she violated the injunctions set down by him. Day went on to marry a woman called Esther who by all accounts agreed with his expectations of feminine behaviour. Anne, interestingly enough, wedded Day’s friend John Bicknell and later attended Charles Burney’s junior household. Having recounted the tale, Sophie reminded us that the narrative we hear is not Anne’s, rather our most complete account of it is through Richard Edgeworth, who pronounced it ‘more romantic than any we find in novels’—surely we are to assume that by romantic he meant fantastical.

Sophie then moved the discussion onto Maria Edgeworth’s social comedy Belinda (1801) which engaged with such ideas of feminine education and openly cited Thomas Day as inspiration. Reminiscent of Day, the character of Hervey ‘adopts’ the orphan girl Rachel, who he renames ‘Virginia de St Pierre’, and then takes her into isolation with only a governess and a bird for company with the notion of educating a wife for himself. Sophie suggested that whilst the idea of building a wife had its appeal, once Hervey meets the cultured Belinda, he cannot help but find Virginia bland in comparison. Sophie contended that in his attempts to be the sole influencer of Virginia’s education, Hervey finds that isolation has rendered her incapable of original or cultivated thought and, as a consequence, he can only think of her as a pupil rather than a companion. Sophie argued that we can think of the novel as a multi-textured re-working of the original story, with the tasks more benevolent and both parties enjoy a respectful and happy ending. As a conclusion, Sophie stated the experiment to build a wife failed in both accounts because the instigators misjudged female education, and in reason triumphing over sentiment, Edgeworth’s novel acts as a plea for female autonomy and reason in female education.

Our second speaker, Professor Holly Furneaux, also of ENCAP, proposed a discussion on the adoption of war orphans by soldiers and how this might be related to her own research, which looks at the military man of feeling: the soldier as an emotional and tactile being. 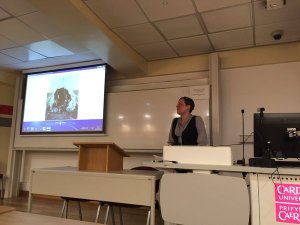 As a beginning, Holly stated that her project principally focuses in the Victorian era, but that the Victorian notion of military men with feelings clearly had its origins in eighteenth-century sentimental ideas about feeling, emotion and sympathy. Holly suggested that the Victorian obsession with the idea of soldiers adopting children was part of a wider debate on the notion of sociability—can intense feelings be reconciled with the increasingly commercial world? How does one respond appropriately to the pain of war? How does one navigate the relationship between feeling and action? As a focal point, Holly asked whether the man of feeling can also be the man of war. Key to this discussion was Henry MacKenzie’s suitably titled Man of Feeling (1771). In this, Mackenzie explores the soldier’s ability to feel sympathy for the enemy, which became a key motif of later constructions of soldiers. Holly stated that we can also see such responsiveness in Samuel Richardson’s Sir Charles Grandison (1753), in which the title character rejects a military career and fighting of any sort, choosing rather to use words as his weapon of choice. Moving next onto Laurence Sterne’s Tristram Shandy (1759), Holly suggested that in the figures of Uncle Toby and Corporal Trim, we see the reversal of any preconception of military masculinity in the fact that these men are wounded, rather than wounding. In their adoption of an orphan, we see these figures linking masculinity and feeling.

Following on from this, Holly cautioned that we must question the benevolence in relation to the children and ask what is the child’s position in these proceedings? Holly argued that in Byron’s Don Juan (1819), the adoption plot figures centrally in order to focus on the cost of war. Writings on war in the nineteenth-century combined a sense of glamorous victory with that of loss and futility, especially the personal cost. Juan’s adoption of Leila is portrayed as an act of compassion that combines masculinity and humanity in noble ways. Holly interpreted Byron’s work as questioning the proportionate value and sentimental attachment to one single war orphan in comparison to the willingness to wage war and cause mass destruction. Additionally, Holly suggested, Byron’s focus on the pretty blonde girl underlines the arbitrary, affective fetished value of particular kinds of life over others. Holly then drew our attention to the fact that in Victorian novels, the adoptive daughter typically ends up marrying into the regiment which poses the question: lives saved or lives appropriated? Holly concluded that in order to reconcile us to national investment in war, it might be necessary for us to see a soldier as a benevolent man of feeling.

And so our final CRECS talk of the semester drew to a close, and we retired one final time—or at least until the New Year—to enjoy wine and nibbles and to reminisce over the fantastic talks we have had the pleasure of hearing.

One thought on “Report on ‘Children of CRECS: Contesting childhood in the Romantic era’, 7 Dec 2015”