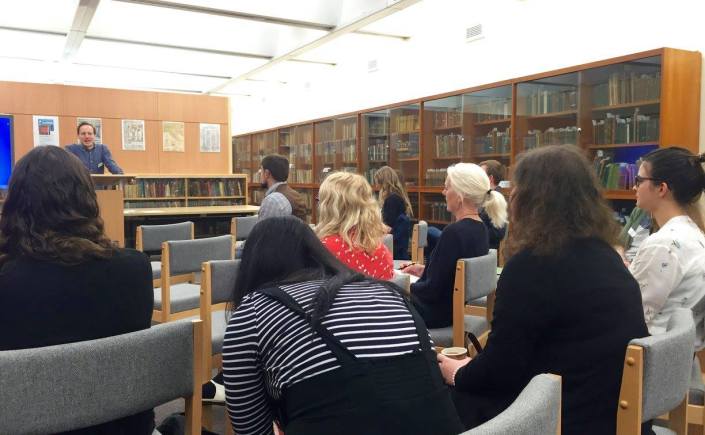 On Tuesday 17 May 2016, Cardiff University’s Special Collections and Archives (SCOLAR) opened its doors to welcome the attendees of the first annual CRECS student conference.

After partaking in a welcome hot beverage—at a safe distance from the special collections of course!—the morning was devoted to student papers. These papers were delivered by a wide array of students from second year undergraduates to third year postgraduate researchers. The atmosphere was splendid, everyone delivered fantastically confident and supremely interesting papers on topics from counterfeiting coinage to memory in Wordsworth. For myself, what struck me as a common theme of all the papers was a demonstration of the richness of eighteenth-century language, and the complexities it yields. From the emotive rhetoric of court cases to the poetics of Ann Yearsley, Hannah More and William Wordsworth, from the complex doubleness of gothic rhetoric to the voice of the traveller in Welsh and Scottish tours, the presentations captured the richness and diversity of the period. For many student delegates, it was their first experience delivering a conference paper and you could not have asked for a more supportive and engaged audience. All the students have been invited to publish their papers on this blog so watch this space! END_OF_DOCUMENT_TOKEN_TO_BE_REPLACED

CRECS was delighted to welcome Tim Stretton, Professor of History at St Mary’s University, Nova Scotia, for his Leverhulme Lecture on ‘Stepmothers at Law in the Long Eighteenth Century’. The concept of the ‘wicked stepmother’ is one which we cannot help be culturally aware of. Tim’s talk was an opportunity for us to delve into the complexities of family law and how the figure of the step-mother was integrated into such legal practises. END_OF_DOCUMENT_TOKEN_TO_BE_REPLACED

As an opening to our third event, ‘Children of CRECS: Contesting childhood in the Romantic era’, Anthony Mandal declared that he was reminded of the 1984 horror movie Children of the Corn—from this we were immediately aware that this was not to be an evening of children frolicking through fields … END_OF_DOCUMENT_TOKEN_TO_BE_REPLACED

Our second CRECS event of the year was ‘Romantic Landscapes: Geography and Travel’, where we gathered to discuss the centrality of travel, topography and landscape in the Romantic period.

Jamie Castell, of Cardiff’s School of English, Communication and Philosophy, began by announcing that his intention, and hope, for the evening’s discussion was that it would persuade us all to do some of our own Romantic wandering.

To illustrate the concept of the Romantic wanderer, Jamie turned to Caspar David Fredrick’s Der Wanderer über dem Nebelmeer (Wanderer above the Sea of Fog, 1818). It portrays a classic Romantic scene of a lone male, facing outward into a swirling cloud of mist that partly obscures the mountain range. Jamie suggested that there are several important considerations we might bring to an image such as this. Firstly, that it might serve as an archetype for a certain type of liberty: the freedom of walking in the mountains juxtaposed with the state of surveillance that the aftermath of the French Revolution brought to Britain. Secondly, that the mind is just as important an aspect as the physicality of the landscape: classic Romantic outward looking leads to inward revelation. It was at this point that Jamie indulged us all with a delightful pun—all Romantic wandering is also a’wondering. A humorous addition it may have been, but nevertheless an important contemplation when considering Romantic poetry. END_OF_DOCUMENT_TOKEN_TO_BE_REPLACED

All was silent in the Arts and Social Studies Library … until this year’s first CRECS event, ‘Shadows & Sandmen: Things that go CRECS in the night’, brought Gothic Romanticism into the, thankfully brightly lit, room. END_OF_DOCUMENT_TOKEN_TO_BE_REPLACED